The joy of self publishing, or so I’ve heard, is that authors can try a lot of different options. Whereas traditional publishing means there’s less control and multiple people make any decisions. Which is cool for indie authors but also exhausting when you have multiple books. And while I have an opinion about everything, I suddenly become paralyzed with indecision, wavering between 25 or 26 point font as if this decision will make or break the whole book.

All I can tell you is I like this cover for One Little Lie. I don’t think I’ve shared it here yet.

Does liking one guy make you gay?
Everybody in Luke’s small town might say yes, but he isn’t so sure. The baseball player feels like the same high school junior who can handle pop flys but not pop quizzes. Except these days, he’s drawn to Ryan Miller’s lanky frame and masculine hands. Which means… Luke has no clue. About anything. Except that he’s not ready to come out to his parents. So to buy time, the athlete lies.

The ruse earns Luke a fake girlfriend, a secret boyfriend, and a whole new mess. The jock needs answers to his sexuality questions if he wants to keep Ryan, but he’s afraid of what the truth might cost him. Can Luke find himself without losing anyone he cares about?

One Little Lie explores coming out along with bisexuality, the bonds of friendship, and falling for someone you never saw coming. If you enjoy LGBT books like Never Do a Wrong Thing and authors like Adam Silvera, you will adore this M/M romantic comedy.

Buy your copy today to enjoy this quirky coming-of-age story!

Happy book release day! This is in no way a national holiday, but my book Falling in Love and Other Bad Ideas is out now.

Sometimes bad ideas are the hardest ones to resist…
Zach Ahmad is more used to fooling around than falling in love. In fact, the bi baseball player’s fondness for having a good time earns him many parental lectures from his disapproving father. But Zach isn’t expecting anything to change during his senior year, until he literally falls into the arms of the new boy at school.

When the new guy isn’t impressed by his charms, Zach can’t help but be intrigued by the dog-lover and do-gooder. Even if his meddling friends are trying to turn his life into a romcom. Just when Zach is ready to take a chance on something real, a curveball from his dad puts his whole future in jeopardy. Can Zach face his biggest challenge ever and still fall in love, or will he fall flat?

Falling in Love and Other Bad Ideas is an LGBT romance about what happens when a guy who never falls in love finds himself in a romantic comedy filled with meet cutes, matchmaking friends, and supposedly adorable canines. While characters in this story appear in the One More Thing universe, this standalone Zach novel can be read separately from the other books.

That’s the official stuff, but I wanted to say a little more about the book.

Inspiration: Zach is the kind of character who takes over. At least, he is for me. When writing this series, I would look back over a scene he’s in and remind myself the book wasn’t about him. Which meant naturally I needed to make a novel about him.

Our common traits: Sometimes I use a specific trait or event from my life, but I usually do more an inspired by true events thing than an accurate recounting. Zach and I sort of have lots in common in that we’re not-white bi people who avoid serious situations, and we don’t believe in the religions we were born into. However, we’re only share those traits in broad strokes, the more specific one goes, the more different we become. The part where I did draw inspiration from my own life is in how Zach’s parents don’t address him being bi.

Differences: Zach is confident in a way few people, including myself, are. His ego is both his biggest strength and weakness. And when focusing a book on him, it’s a great place to start as we test his confidence and see what’s under his bravado.

I know that you can read an excerpt from the beginning of the book anyway on Amazon, but it just feels wrong to start posting snippets and not start at the start. So here is an excerpt from Like You A Latte, a story spanning the junior year of a brainy, bookish student who meets a laid back guy in a coffee shop.

Others behind the counter were rushing around frenzied, but now that I noticed one of the baristas in particular, I saw that he was different. It took more than an afternoon rush to rattle him. He smiled at each person who came up to the counter and I was struck by how genuine it seemed. There’s no way he could be so friendly. Not while cranky teenagers and adults poured in here for a caffeine fix, rattling out orders and huffing impatiently. Yet he was easy going, the calm in the center of the storm.

Lately, my life held a whole lot of storm and not much calm, so someone like that held a certain amount of appeal at the moment. Even if otherwise he might not be my type. I wondered if his brown hair would feel as soft as it looked and what it felt like to have a posture that relaxed.

Maybe he was an artist. There were faint marks of color on his arms that he hadn’t quite washed off and eclectic wristbands on one arm. One of bands was a rainbow, which might be why Quinn assumed he played for my team. And the once over he gave me when we finally made it up the counter made me agree with her hypothesis.

After diving into school, no one else had caught my attention in a while. I felt the first spark of attraction in my gut and my pulse sped up. The angst and despair of my breakup had faded and the fog of academics obscuring everything else lifted somewhat and I just stared at the boy in front of me. The novelty of it left me speechless for a moment while I remembered that guys existed. Guys like this boy before me who were fun to look at with soft hair I wanted to touch. I savored it, that feeling of interest, after going without it for so long.

Which meant that for a few moments, it was just him and I, eyes locking as I finally made it to the front of the line. He had hazel eyes. The light caught them just right and almost made them sparkle. I shouldn’t let his smile get to me, he gave that exact smile to everyone, but I wanted to believe it meant something different when it came to me and I almost convinced myself it did as his eyes stayed on mine and—

“Are you going to order?” said an impatient female voice behind me.

“Oops,” the guy said with a soft laugh and smiled sheepishly at me. It was even more captivating than his earlier smile.

You can get the rest here. 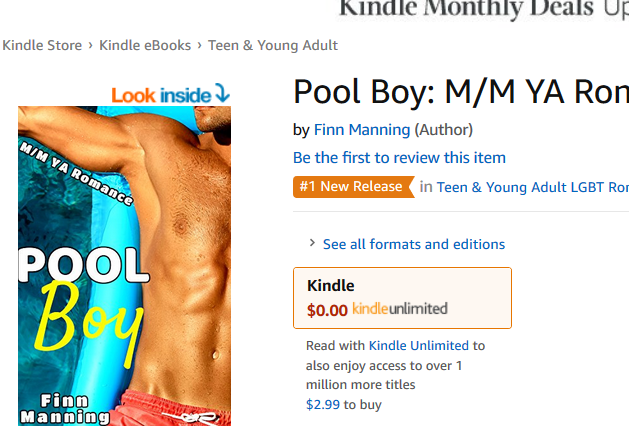 I tried and somehow managed to release three books for the summer. The latest one, Pool Boy, made it to the number one new book in LGBT Romance for teens. Getting that little orange sticker (even for a moment) feels great. I captured the moment for posterity of course.

Thank you to everyone who got the book!

YA LGBTQ fiction featuring contemporary romance and coming of age books. Info, extra scenes, and more by F.N. Manning. And TV, music, and pet posts, because staying on topic has never been my strong suit.